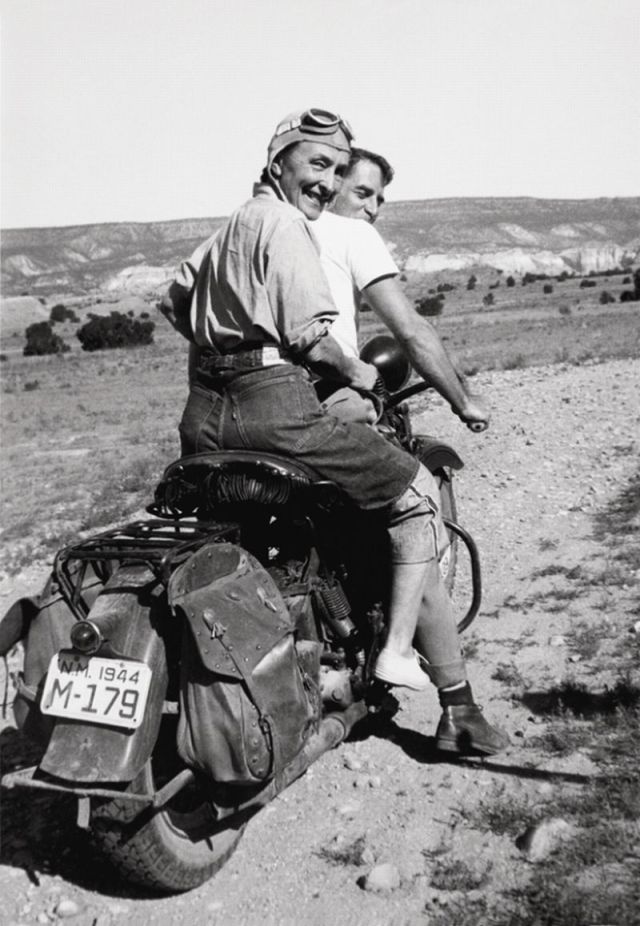 It’s spring again in Santa Fe. One of the ways you can tell; the Georgia O’Keeffe Home and Studio in Abiquiu, is open for the season. The iconic artist’s village home is open from March 15th through November 22nd. For O’Keeffe fans visiting the area, a day-trip including the Georgia O’Keeffe Home and Studio Tour, a drive through “O’Keeffe Country” and a visit to Ghost Ranch are must-dos.

A home in the village

Georgia O’Keeffe’s first Abiquiu home was Rancho de los Burros at Ghost Ranch. The soil at her ranch home was proving difficult to farm. The artist, an avid gardener, wanted a local home where she could grow food. When she first saw the traditional village adobe house (circa 1796), she knew she had to have it. The property, then a ruin, was owned by the local Catholic Diocese. Initially, they refused to sell it. O’Keeffe was a tenacious woman. Finally, in 1945, after years of negotiation, the Diocese relented and sold it to her. They stipulated that the original structure be kept intact. Selling it was a wise decision. Had they had not, the house would have eventually collapsed. The house is set on a mesa overlooking the Chama River affording great views of the Chama River Valley. The artist immortalized some of what she saw our her studio windows in here work.

Gardening and putting food by

Her gardens were a visual pleasure and offered subjects for painting.  They were also a source of fresh food. Seasonal bounty that could not immediately be consumed was canned or frozen and stored in a large freezer for later use. O’Keeffe’s kitchen and pantry are a tribute to 50’s modernity. Her appliances (which she retained until she left the home in 1984) were top of the line when she moved in.

The esthetic of minimalism

The home’s sparse furnishings represent some of the biggest names in Mid-century design. Pieces by Herman Miller, Charles Eames, and Eero Saarinen are scattered throughout the house; a Noguchi rice-paper shade reigns over the simple dining-room table (it is the only lampshade in the house, O’Keeffe favored bare bulbs). She was a collector of rocks and stones; they are an integral part of the home’s décor as are some of her famous skulls.

The tour takes an hour. Some rooms are accessible to visitors, and some, because of fragile flooring, are glimpsed through windows and doorways. The gardens and grounds are beautiful. The salt cedars, poisonous jimsonweed (Datura) and sculpted junipers create an unusual landscape. At the end of the tour, visitors reboard the bus and leave this well-preserved piece of the past, hopefully, with a better understanding of the artist and her work.

Flesh out the day with a visit to Ghost Ranch where O’Keeffe spent her summers. While her home there isn’t open to the public due to its deteriorated and fragile condition, visitors can see the places and views that inspired the artist. You can also catch a glimpse of Rancho de los Burros her home there from a distance.  The O’Keeffe Landscape Tour, is a one-hour bus-tour of places that the artist painted. One of the highlights of the tour is the view of  the Pedernal, the mountain they may be familiar with from the artist’s work. She  wrote and spoke about and frequently painted her beloved mountain with it’s unusual summit. “It’s my private mountain, it belongs to me,” she was heard to say. ” God told me if I painted it enough, I could have it.” Reservations are required; space is limited.

The basics of touring Georgia O’Keeffe Home and Studio

The Georgia O’Keeffe Home and Studio is open mid-March through October. It’s only accessible by tour and reservations are required. Plan in advance; tours fill up early, especially in July and August. Tour groups are limited to 12 people and many visitors want to see where the iconic artist lived and worked. Guides are local people and are very knowledgeable about the artist, her home and the area. You can also arrange private off-season tours.  For information and reservations, call 505-685-4539. Ghost Ranch offers their Georgia O’Keeffe Landscape Tour year round.